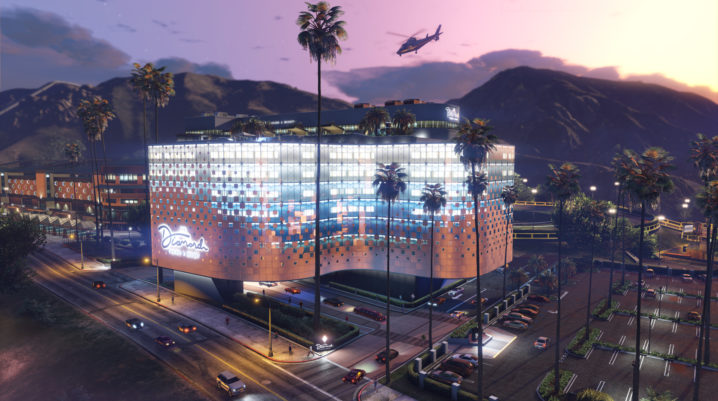 Good news for GTA 5 fans, as there is current information available in the GTA Online Casino update for the game. The GTA Online Diamond Casino and Resort will be the place to go for your in-game gambling needs, and it would open its gates on July 23rd, as Rockstar Games announced.

GTA 5 is still going strong after its late 2013 release date. The sale of the game has generated millions of users that also populate the GTA Online version of GTA 5 that is based on an open-world environment around southern California.

Content to GTA Online is added yearly, with the last three updates being received in 2018. These updates changed the way money was made in the game, opened up racing tracks and introduced Arena War. You’ll be able to find the casino experience in the Southern San Andreas Area. More specifically near the Vinewood racetrack, surrounded by the Tataviam Mountains.

Rockstar has said the casino will be high tech and will have modern entertainment. To hint at the casino’s current status, an “Opening Soon” sign has been removed from the place in question. There will be a concierge service, drinks at lounges and bars, shopping, and of course lots of table games.

The release date for the GTA Online Diamond Casino and Resort DLC will take place on July 23rd, as Rockstar Games has officially stated. It is reported to be the largest and most extravagant DLC to come to GTA Online ever.

Rockstar wants to keep fans in the dark concerning the release date. Possibly until the last possible moment. Artwork for the DLC has been released but nothing that can be assumed or learned from it.

The marketing buzz that is being created from the teasers and the photos looks like it’s paying off. As more and more fans are excited about the release GTA Online Diamond Casino and Resort DLC, with all sorts of theories and rumors flying about on the internet. However, Rockstar Games just revealed what the DLC is all about.