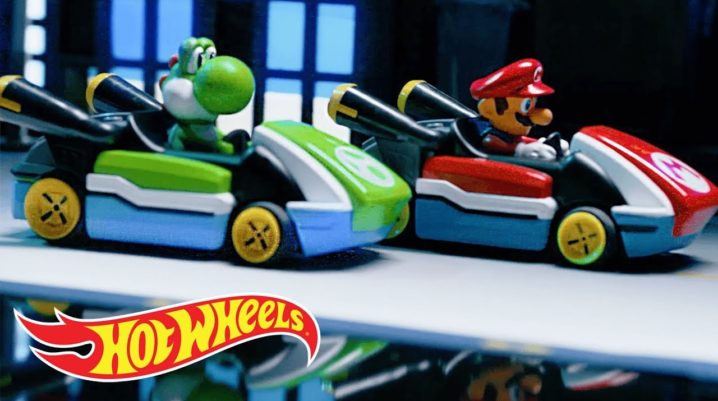 One of the most loved and played games on the Nintendo Switch is Mario Kart 8 Deluxe. There is hard to see a console developed by Nintendo that has no Mario Kart title on it. Having said that, it should come as no surprise that Nintendo and Mattel have partnered up to launch a new series of Mario Kart Hot Wheels. The two companies have commented on the first arrival of these track sets and cars, a couple of days ago.

The vehicles that are being released with the brand new set are 1:6th scale die cast cars designed after the karts that show up in the Mario Kart franchise. With the release, four characters will be available, namely Mario, Luigi, Yoshi, and Bowser.

Hot Wheels revealed that other characters would launch soon after the first four released, such as Koopa Troopa, Princess Peach, and Toad.

Those characters are being released together with three track sets as well. The Piranha Plant Slide and Thwomp Ruins track sets, which are invoiced as ‘course-inspired assortments,’ and the Mario Kart Circuit Track Sets will appear. The company has not yet revealed whether there will be some additional track sets to launch after the official release, but these are a success at retail, and it is safe to think that there will be more characters as the game will unfold.

Aside from that, the price tag has not been unveiled either, but we can probably expect there Mario Kart Wheels new series to sport a price of or near the usual Hot Wheels sets cost, perhaps with a premium version pinned on top because they perform on Nintendo perfectly.

Mattel said that these new series of Mario Kart Wheels track sets and cars would be released worldwide this summer, but it did not give any more details. The game giant will show off these items at San Diego Comic-Con next month, together with a particular Metal Mario car that can only be bought at the show.