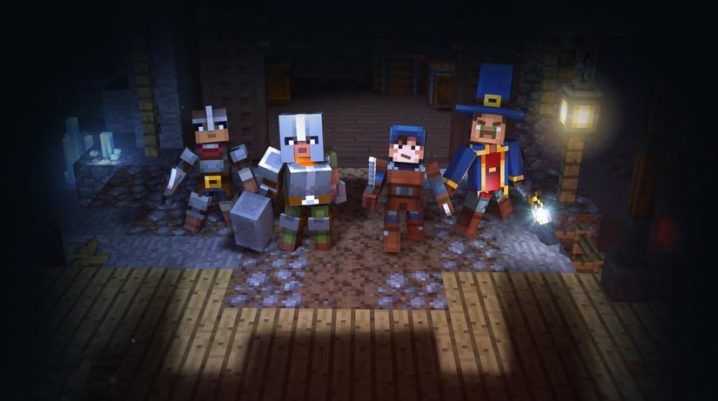 Second of all, Minecraft Dungeons is not working on the traditional class-based structure. What you will do in the game is to build your play style according to the items, armor, weapons, and enchants that you have. You can choose to play the defensive warrior type class or to use spells and have light armor, or even be an agile archer with bows and crossbows. Also, Mojang says that the players will have around twenty different types of enchants for melee weapons, another twenty for the range weapons, and other artifacts that will produce special abilities.

Third of all, a lot of players are curious if Minecraft Dungeons has a story. From Manjong, we know that the game is an overarching narrative and a very light game. The central enemy is the Arch Illager, who is having the same role as the Illager from Minecraft. But here the Arch Illager is kidnapping innocent villagers, and it is devastating towns. You will come in action as the hero, and you must end the dark reign of Arch Illager. Of course, during each level, the objective will change, so you will have to defeat other boss monsters from the game.

Moreover, Minecraft Dungeons main story will unlock other challenging missions after you complete the first part. The developers are saying that they don’t want for the player to feel a grindy ending, so the focus is on the fun battles and giant monsters. Also, the cool thing is that you will have a central camp where you can decide what mission to take or not. The games will alert you what difficulty each task has and what power level you will have. Take note that the harder missions are giving you better loot.

Also, the loots are coming randomly in the game so that you will have chests, puzzles to solve, and even the bosses will drop unique weapons. With each item you gather, you will have a power level that will make the score for your character. If you are wondering what kind of mobs Minecraft Dungeons will have, we know that too. The crowds are the same from the base game, such as Skeletons, Creepers, Zombies, Spiders, and the Endermen, which are now the leading bosses. New enemies are coming too, such as Necromancer that has the power to resurrect the defeated mobs and the Wraith which will set the map on fire.

Drawing to a close, we can add that in Minecraft Dungeons you will not build stuff because the game is focusing on the RPG combat. Regarding the monetization and loot boxes, Mojang is saying that there will not be any pay to win, only DLC expansions like in Diablo III. Take note that Minecraft Dungeons is playable up to four persons in local or online co-op play, and you have the support of the game on Xbox, PC, and the Nintendo Switch, and PlayStation 4. Minecraft Dungeons will be rolling in the Spring of 2020, and it will cost $20 and $30 because it’s coming in two editions, and you will have it as part of the Xbox Game Pass Subscription.