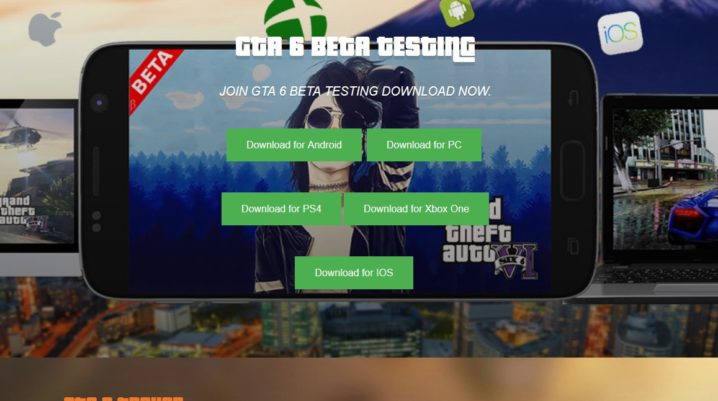 We know everyone is waiting to finally hear Rockstar saying they’re working on GTA 6 and it’s so close to being finished that a Beta is even right around the corner. But we’re sorry to disappoint you this is only a dream.

However, with all the rumors, suppositions and ‘leaks’ on the Internet, people sometimes are confused, and the fact that many fake sites appear and tell people GTA VI is here is not helping.

Yes, there is a website called ‘GTA 6 Release Date’ tricking people into clicking their download links that are supposed to lead to the iOS, Android, PC, PS4 and Xbox One beta testing.

The alleged Android file for GTA 6 is around 54 MB and the PS4 file is a 33MB archive. And we know games have a larger file size than that, even if they are only demos.

Except for the fake download links which we highly recommend not to click or open as they might be harmful to your devices, there is also a release date for GTA 6 – claiming that it will come out this year and the beta is now live.

The facts about GTA 6 is that Rockstar hasn’t yet announced anything about the game, nothing about beta or a possible year of release.

The fake GTA 6 website uses images found with a simple ‘GTA 6’ search on Google and the same logo from GTA V at which an ‘I’ was added to make it work for ‘GTA VI’.

It worth noting that this isn’t the first time such fake websites show up – the same happened before Fortnite was launched on Android or when they tried to trick players on clicking on an Apex Legends Mobile version.

Our take on this crazy trend? Don’t fall for it! Search for more information before you download strange ~50MB files that say they’re for GTA 6. There is no GTA VI at the moment – not even in Beta version, and it’s definitely not available for download.