Home News OnePlus 7 Pro vs. Samsung Galaxy S10 Plus: Which One is Winning the Battle of Features? 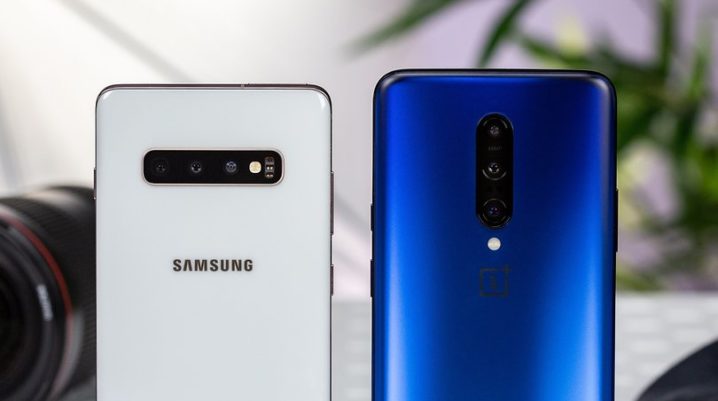 OnePlus 7 Pro came as intense competition for Samsung’s Galaxy S10 and S10 Plus, with the same features as the later, but for a full $200 less for the regular S10 and $300 less for the S10 Plus model respectively.

We decided to compare the two devices and pick a winner although we suppose it will be quite the hurdle. So which one should you buy? Read below the full comparison.

OnePlus 7 Pro has a full-screen design, and it incorporates a pop-up selfie camera which means that it comes with no punch hole and notch in the display.

The Galaxy S10 has a punch hole, and the Plus version has two for its selfie cameras. However, Samsung’s devices seem more comfortable to use with 6.17 ounces versus OnePlus 7 Pro, which is a bit heavier than the S10 Plus, having 7.26 ounces.

​The S10 also comes with a water-resistant rating, IP68, while OnePlus doesn’t have one. There’s also one more feature the S10, and S10 Plus have, namely a headphone jack, which OnePlus doesn’t.

When it comes to the available colors of the models, OnePlus offers three, namely Mirror Gray, Nebula Blue, and Almond, which will come in June. Samsung offers five different colors, including Prism Black, Prism White, Prism Blue, Prism Green, Flamingo Pink, and the S10 Plus has two more colors available at an extra price, the Ceramic White and Ceramic Black.

The winner of this section is OnePlus 7 Pro.

One significant advantage for the OnePlus 7 Pro is its 90Hz refresh rate, which makes the device more receptive, while the S10 devices have a 60Hz refresh rate.

The OnePlus device’s 6.67-inch display managed to cover 180 percent of the sRGB color range, in comparison to 136.5 percent of the 6.4-inch Galaxy S10 Plus’ display. Also, the OnePlus’ screen is more precise with a Delta-E rating of 0.18, while the S10 Plus got 0.29 rating. However, the S10 Plus’ display hits 625 nits, which means it can get much brighter than the OnePlus’ screen, which only managed to reach 363 nits.

Both devices pack three rear cameras, which includes a primary camera, an ultra-wide came, and a telephoto lens. Compared to S10 models which come with 2x optical zoom, One Plus 7 Pro has a 3x optical zoom.

The S10 does an overall better job at capturing images than the OnePlus 7 Pro therefore, the winner of this category is the Samsung Galaxy S10.

Both smartphones sport the same Qualcomm Snapdragon 855 processor, but the OnePlus manages to do better on standardized tests, and it performs faster as well. For instance, when installing the PUBG mobile game, it only took 3.44 seconds, whereas Samsung’s devices managed a 7.8 seconds installation. This is because OnePlus uses faster UFS 3.0 storage, and Samsung does not.

The OnePlus has overall faster and better performance than the S10 Plus, especially when opening and exiting apps such as Chrome and Play Store.

The simple model, Galaxy S10’s battery lasts up to 10 hours and 19 minutes, so it’s also better than the OnePlus 7 Pro. However, OnePlus comes with fast charging due to its Warp Charge 30 technology, managing to charge the battery to 60 percent in just 30 minutes. The S10 Plus charged up to 40 percent in 30 minutes.

Even though both devices are powered by Android Pie 9.0, the OnePlus gets a version of OxygenOS, while the S10 has the OneUI version of Android.

The most impressive features in OxygenOS is the Zen Mode, which turns out your device for 20 minutes, allowing you only to make calls and capture photos during that time. OnePlus comes with a Screen Recorder feature as well.

The Galaxy S10 provides Wireless Power Share, which allows you to charge other devices that support the same function. The Galaxy line also comes with microSD card slot and a headphone jack features OnePlus doesn’t have.

The winner of this category: Galaxy S10

Samsung Galaxy S10 and S10 Plus are available via all the main retailers, while the OnePlus 7 Pro can be bought from the official site and T-Mobile.

Samsung Galaxy S10 ended up the overall winner, beating the OnePlus 7 Pro with only three points, namely the wireless charging, microSD card slot, and headphone jack, and being water resistant. OnePlus is impressive on so many levels, though, and it could have easily won the battle.