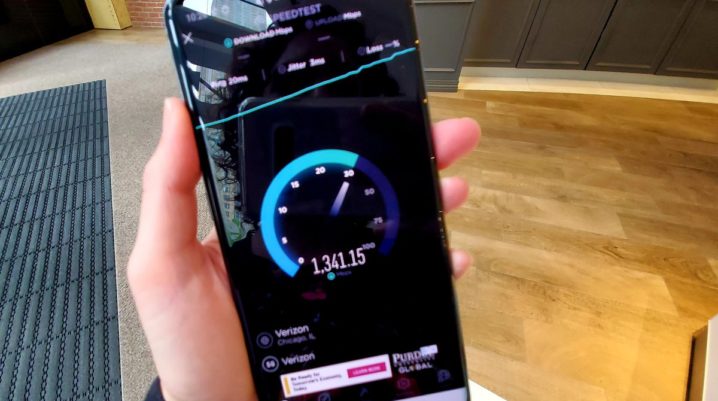 TechRadar’s Matt Swider has conducted a series of 5G speed tests using a Samsung Galaxy S10 5G across Chicago for three days. Chicago is one of the two U.S. cities where Verizon has 5G nodes, with Minneapolis completing the list of the incredible 5G speed availability. However, one can reach 5G high speeds only by using ‘the 5G shuffle.’

One of the speed tests reached 1.385Gbps, but to get the speeds, you would have to move around the 5G nodes, Swider said.

He has been using Ookla app to observe the top speeds, but he also performed the test, while operating the 5G shuffle, on Netflix, Amazon Prime Video, and Android game downloads. Shockingly enough, it took 38.78 seconds for the Stranger Things full first season to download. When compared to the 4G test, which took one hour and 16 minutes to download the same Stranger Things season, we can say that the difference is quite overwhelming. The 5G device used for the test was (as mentioned above) a Samsung Galaxy S10 5G, and it was connected to Verizon’s 5G wideband signal. The device used for comparison was an iPhone XS Max 4G, connected to the AT&T’s 5Ge, which is not a 5G signal in fact, but a 4G.

The test speed was also conducted on Fortnite, performing the download in just 2 minutes and 55 seconds, and on Asphalt 9: Legends, downloading the game in 2 minutes and 23 seconds on the Galaxy S10 5G.

Even if these 5G speed tests weren’t peaking 1.4Gbps, they were fast, at around 1Gbps, but it also depends on the app makes which needs to be optimized to enable fast speeds. What this means is that the efforts of the 5G device and the straight connection of the 5G node were important, but so is the effort from all the other app and content developers.