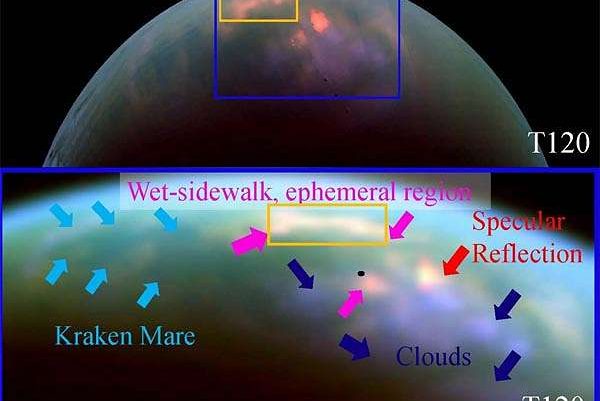 According to Rajani Dhingra and his colleagues at the University of Idaho, this precipitation would be an indication of the beginning of the summer season in the northern hemisphere of Titan.

The surface of this moon is similar to that of the Earth, with rivers flowing into great lakes and seas. We already knew that it is also swept by seasonal precipitation, much like the monsoon on Earth. With methane instead of water.

The moment when this rain reaches the surface and the regions where it falls, however, remain poorly known.

A little over a year before the disappearance of the Cassini probe, one of its instruments had detected a shifting ephemeral phenomenon of 120 000 km2 near the North Pole of the natural satellite.

The analysis of its luminosity, its spectral characteristics and the geological context allows the scientists to establish that they are in fact specular reflections of a solid surface wetted by a liquid.

It’s like watching a pavement wet with rain and lit by the sun.

In addition to the Earth, Titan is the only other known place in the solar system where liquid rain interacts with the surface.

This study partially documents the seasonal rains at Titan’s North Pole. It also makes it possible to establish the moment of the arrival of the Nordic summer, which is offset from the predictions of the models.

Summer has arrived a little late, but it is there. We must now find out what caused the delay.

This work also establishes that the “wet sidewalk effect” can help distinguish seasonal changes from other stars.

The details of this work are published in the Geophysical Research Letters.